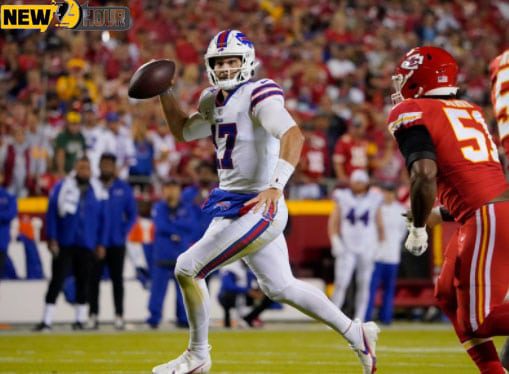 The Buffalo Bills were able to get rid of the monkey on their back, namely the Kansas City Chiefs.
On Sunday Night Football,

Following that, here are five things to remember from the Bills’ victory against the Chiefs:
Josh Allen was up against Patrick Mahomes in this game.

Two of the greatest quarterbacks in the AFC went head-to-head, and Allen won for the first time.
Allen only completed 15 of 26 passes, but that doesn’t matter.

Allen did not turn the ball over as Mahomes did, and he only needed 15 completions to win.

Allen threw for a total of 315 yards and three touchdowns. He ran in for a touchdown as well.
Allen was, without a doubt, the greatest quarterback on the field… and it wasn’t even close.
The Bills’ failure to shut down some of the Chiefs’ playmakers in the passing game was the narrative against them in 2020. Travis Kelce, the tight end, was not hampered in the least.

Last season, he scored four touchdowns in two games against Buffalo.
Both Kelce and wide receiver Tyreek Hill were shut down by the Bills defense on Sunday Night Football.

Kelce did score a touchdown, but the Bills mostly kept both players quiet,

and his TD came after Kansas City was already down by a large margin.
The Bills led the NFL in takeaways before Week 5, and their turnover differential was among the best in the league.

That only boosted their chances against the Chiefs.
Safety Micah Hyde got an interception, as did defensive end Greg Rousseau of all people.

Rousseau’s performance was particularly impressive since he not only swatted Mahomes’ ball but also snatched it out of the air on his own.

The Bills, on the other hand, did not turn the ball over despite the weather.

Allen has problems with ball security on occasion… but it wasn’t a concern in Kansas City.
Winning the turnover fight against strong teams is always crucial.

That was once again shown to be accurate.
Dawson Knox, the Bills’ tight end, is unstoppable.

What other way might you use to characterize him in five games? He scored against the Chiefs… of course, he did.
Josh Allen, the quarterback for the Buffalo Bills, stretched a play and sent Knox deep for a touchdown.

So far this season, Knox has five touchdowns, the same number as his first two seasons combined.
Knox had a total receiving yardage of more than 100 yards in the contest.

It’s the first time he’s done so in his career.
And how about Emmanuel Sanders, the wide receiver? He now has two touchdowns on the season.
While the Bills did play well (after all, they did win), they did make a couple of mistakes.
It seemed early on that this would be a lengthy day.

Allen was sacked horribly, but it was later ruled a deliberate grounding to get the Bills out of field goal range.

On a deep grab by Stefon Diggs, it seemed as though he didn’t believe a defender was in the area,

but there was. Is it possible that Diggs celebrated a score a little too soon? Or did he just lose track of his position on the field? Regardless, that play might have resulted in a score,

but Buffalo opted for a field goal instead.
It was questionable whether defensive lineman Ed Oliver and center Mitch Morse’s late penalties were justified… But they occurred,

and the Chiefs were able to keep their season alive for a little longer.
These are all areas that the Bills should strive to improve.

Those may come back to haunt them on another day, and it could against the Chiefs if the two teams meet again in the playoffs.

Euro 2020: England beat Croatia within the opener with Sterling goal