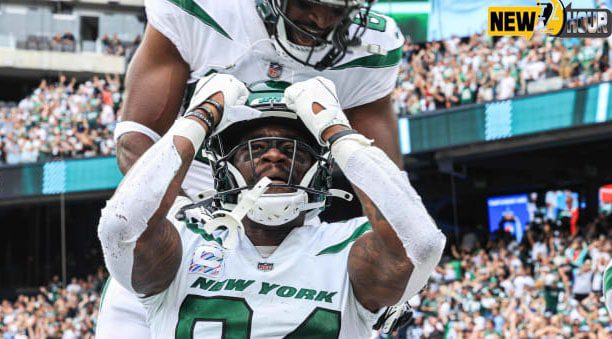 Despite without Russell Gage and Calvin Ridley, the Atlanta Falcons are dominating the New York Jets in London on Sunday morning.

After their surprise victory against the Titans, many experts predicted the Jets to win this game.
This selection is looking questionable halfway through the game;

apart from one Jets drive, the game has been all Atlanta.

You wouldn’t realise Ryan was without his two greatest receivers if you didn’t know.

The veteran quarterback has been very precise in his distribution of the ball to whomever Atlanta has sent out to line up.
Matt Ryan’s tight ends Kyle Pitts and Hayden Hurst both scored early touchdowns,

Hurst fumbled in the endzone and re-caught it as he went to the ground.

Matt Ryan has been at his best in London with this Atlanta Falcons offensive onslaught.

Kyle Pitts eventually scoring and Matt Ryan leading his side to victory in London were the highlights of the first half.

The difficulties for Ryan cannot be overstated; in this game, he is relying on Lee Smith and Tajae Sharpe.

Players who are unlikely to appear on any other team’s roster.

This isn’t meant to disparage either guy; rather, they’re borderline practise squad players that Ryan has incorporated into the offence and converted into early weapons in London.

At least one catch is made by Lee Smith, Tajae Sharpe, Christian Blake,

Kyle Pitts, Hayden Hurst, Mike Davis, and Cordarrelle Patterson in the first half.

Ryan’s ability to distribute the ball and get virtually any player on the sideline engaged comes to mind.
Atlanta led 20-3 at halftime,

and even this Atlanta squad should be able to maintain that advantage against a depleted Jets offence.

Ryan is far from finished scoring points, and with a weak defence, he cannot afford to grow complacent in London.