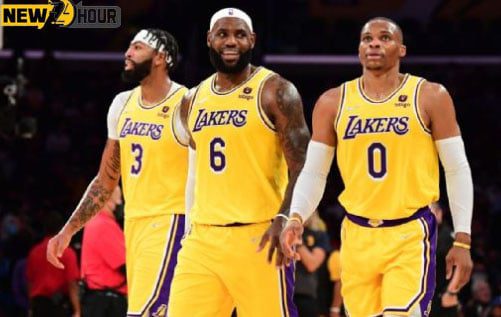 In a 111-99 defeat to the Golden State Warriors on Tuesday, the Lakers‘ brand-new Big Three made their preseason debut.

While the outcome of Russell Westbrook, LeBron James, and Anthony Davis’ first court time together was another loss, dropping L.A.’s preseason record to 0-5 on the season,

the players’ postgame message was one of patience while radiating optimism.

“It’s going to take a minute for us to become the team we know we can be,” said James,

“We’ll have times when we’re not entirely sure what we’re doing. It’s possible that we’ll take a step backward.

But it’s all part of the package… Nothing is worth getting if it isn’t worth fighting for, in my opinion.”

Westbrook, who convinced the Washington Wizards to pursue a trade with the Lakers in the summer,

looked his best in purple and gold yet — which isn’t saying much given the shot 4-for-19 with 16 turnovers in his first two games.

However, his quickness in the open court, despite being surrounded by so much skill, will be a game-changer this season.

After ending with 10 points, 10 rebounds, 6 assists, and 5 turnovers, Westbrook remarked,

“We had some nice spurts.” “It is, without a doubt, the first game.

However, there are certainly positive aspects to it that we may learn from… It may make us feel a bit better.”
Moral victories matter nothing to James, who enters the season looking for his fifth ring,

which would tie him with Kobe Bryant, Magic Johnson, and Tim Duncan for the most in NBA history.

Despite this, the 19-year veteran promised to lead his team through its infancy.

“As a leader, my duty is to keep myself from being irritated,”

he said. “If I don’t become upset, I believe it will spread to the rest of the team.

I’ve never been someone who is content with mediocrity.

But I realize that things take time.

Davis had a great game against Golden State, scoring 20 points on 7-for-12 shooting, 6 rebounds, 2 steals, and 2 blocks to lead the Lakers. His initial sight at L.A.’s new-look lineup,

which had him starting at the 5, along with James, Westbrook, Carmelo Anthony, and Kent Bazemore, gave him hope.

“With myself, Bron, and Russ in motion, we witnessed some amazing stuff,” Davis added.

“There are infinite possibilities in terms of what we can run and accomplish.

Even if there were some positive aspects, there are many areas where we can improve.”

The Lakers finish the preseason on the road against the Sacramento Kings on Thursday,

then return home to face the Warriors again the following week.

The Lakers still have a lot of work to do before they can even come close to a finished product,

which begins with having all of their players healthy. Trevor Ariza (ankle surgery) is anticipated to be out for at least two months; Talen Horton-Tucker (thumb surgery) will be out for approximately a month;

and Kendrick Nunn (right ankle) and Wayne Ellington (left hamstring) both sat out Tuesday, as did Malik Monk (groin).

“How can we integrate these people if they don’t play?” Davis stated his opinion.

“We haven’t had our complete staff yet, so we won’t be able to look at every aspect,” says the narrator.

With an 82-game season set to begin for a team that only worries about winning 16 games from April through June, the Lakers have time on their side.

“It might take all year to truly be at our best,” Lakers coach Frank Vogel said.

“Ideally, that’s when we’re at our best — heading into the playoffs.” “But we’re in the mentality to go right to work and hit the ground running, with everything working as smoothly as possible.

But it’s fair to anticipate some difficult nights early in the season,

but we knew that going in two years ago, and we came out strong. That is, after all, what we are looking for.”